What Are Trigger Points?

A trigger point is a part of the muscle which gets stuck in contraction. A prolonged contraction results in a prevention of blood flow to that part of the muscle. The pain that results is due to a lack of oxygen and a buildup of waste materials. The same can also happen in case of an injury.

Plus, repetitive motion can also create trigger points when the muscle does not get time to rest.

Sternocleidomastoid pain brought on by trigger points is not only localized but can also be felt in distant parts of the body.

What Can Cause SCM Trigger Points to Activate?

In the case of SCM, the sternocleidomastoid muscle extends the head and turns it to the opposite side. While doing so, if the neck is positioned in an awkward pose, then it can create trigger points. At the same time, the SCM is also an auxiliary breathing muscle. This means that it is also used when you breathe deeply.

This muscle group not only bends the neck and head forward but also allows the neck to bend sideways. When you turn your head, the SCM is in motion and also stabilizes the head when you tilt your chin upwards.

In addition, the SCM also assists in the actions of chewing and swallowing.

When the SCM is strained or shortened, the muscle itself rarely hurts, but can cause various trigger points to become engaged. The resulting problems can be felt elsewhere such as the head, neck, eyes, ears, nose and throat.

In many cases, sternocleidomastoid pain gets misdiagnosed and the actual cause remains undetected. Some of the activities that may trigger discomfort due to this muscle can include the following: 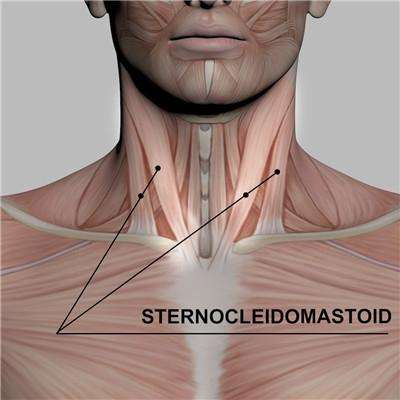 What Are The Different Reasons For Sternocleidomastoid Pain?

The SCM can bring about a number of symptoms that can include head and face pain, visual disturbances, balance inconsistencies and ear and sinus problems.

The sternal division of the muscle can trigger pain to the cheek, or may create discomfort at the top of the breastbone. This muscle may also bring about deep eye pain which resides below or above the eye. It may also be responsible for triggering sinusitis-like symptoms, sore throat pain or trouble when swallowing.

Sternocleidomastoid pain caused by the sternal division of the muscle can affect pain to the chin area or to the back of the head.

Sternocleidomastoid pain can set off dizziness or imbalance in some people. These problems are linked to the clavicular division of the SCM. The discomfort that results can be felt as an unpleasant sensation in the head. The feeling can become worse with movement and cause a sense of unsteadiness. Some people may even experience this as a spinning sensation.

With this type of sternocleidomastoid pain, people may feel unsteady on their feet, or shift from one side to the other when walking. It may also cause them to fall over when they bend or stoop. In some very severe cases, stretching this muscle swiftly may also cause fainting.

Dizziness brought on by the pain may go on for a few seconds to a few hours if the muscles is stretched. Sometimes, this can bring about nausea as well.

Sternal division, on the other hand, can bring about disturbances in the eye and vision of a person. As a result, there may be some reddening or tearing of the affected eye. Sometimes the eyelid may start to droop a little as a result of muscular spasm around the eye. The same muscle may also bring about twitching of the eyelid or the eye itself.

Sternocleidomastoid pain causing visual difficulties may also cause some vision blurring or dimming, or light sensitivity. Some people may also experiences changes such as double vision.

This is another symptom of sternocleidomastoid pain caused by the sternal division of the muscle. Severe ear symptoms can create a reduced ability to hear in the affected eat or in very severe cases, cause loss of hearing.

Some people may experience ear symptoms like a crackling sound or pain which mimics an ear ache. Some others may feel an occasional itch deep within the ear.

Trigger points in the sternal division may actually bring about sinus congestion. This includes experiencing a runny nose, and tearing on the same side as the trigger points.

SCM trigger points can also cause persistent headaches if the condition is not treated correctly.

Sternocleidomastoid pain can also create various other symptoms that can be difficult to trace back to this muscle group. Some of these can include toothache, a dry cough, nausea, voice hoarseness or a cold sweat on the forehead.

How to Treat Sternocleidomastoid Pain?

There are a number of ways in which sternocleidomastoid trigger points may be relieved. Steps as basic as turning the head lightly away from the side that you are working on can help. Others can include different kinds of therapies to find relief. Here are some ways in which you can soothe the discomfort.

When you think about the anatomy and physiology of muscles, it is important to know that when tense muscles contract chronically, this decreases their blood circulation. The lower blood supply leads to a decrease in oxygen and nutrient supply resulting in fatigue.

With appropriate handling of muscles, massages help restore blood supply and nutrients to the muscles. With massage therapy the muscles are better able to recover from exertion and fatigue.

When muscles are relaxed, spasms, tension and cramping are also dramatically reduced. Any adhesions are broken down while connective tissue is stretched. Overall muscular tone is improved while soft tissue pain is reduced. Massages help prevent muscular atrophy and simultaneously increase a person’s work capacity.

You can perform number of stretching exercises to make the SCM muscle strong and flexible.

To do this move, pull the chin back to align the neck with your spine. Center the neck over the shoulders, align the chin so that it parallels the floor. Retract your neck. Hold in retracted position for 20- 30 seconds.

This exercise also has the benefits of a posture exercise and can combat the postural deficiency known as a forward head posture.

This exercise helps lengthen the SCM when you bend the neck to one side and turn it away from the other side.

To start, stand up straight and retract the neck. Follow this move by tilting the head to your right and rotating the chin to look upwards until a stretch is felt on the left side of the neck. Hold position for 20-30 seconds before repeating on opposite side.

Now push against the wall so that your neck is tilted to the right and shift your body in the opposite direction. Repeat on other side.

This exercise also uses your body weight and a wall to work on the sternocleidomastoid muscle with a forward bend in place of a side bend.

To start, place a mat at chest height against the wall. Step back keeping the legs straight while tipping forward to put your head against the mat. Do not use a pillow or something that may slip.

Hold both hands behind the back and straighten the back in line with the legs. Now, extend chin toward the mat which will cause both your hips and the back to move backwards.

These gels are available for both cold and warm therapy relief, each with its own benefits.

This is an effective way to relieve sternocleidomastoid pain. The gel works by cooling the area much like ice and will prevent swelling. It is recommended for people who suffer from neck injuries or sudden onset of pain.

To use, rub the gel onto the affected area including the upper back and shoulders. Continue rubbing into the neck going up to the base of the skull and behind the ears.

These gels are designed to provide adequate heat without a burning sensation. Warm therapy gels assist in reducing tightness and pain at the aback of the neck and the base of the skull. Applying a warm therapy gel to the back and sides of the neck will help with reducing sternocleidomastoid pain and whiplash pain.

Some people may be prescribed NSAIDs such as Advil or ibuprofen to relieve the pain.

How to Correct Triggers for Sternocleidomastoid Pain

You can try to prevent and regulate the discomfort of SCM by following some simple corrective actions. Most of these have to do with improved posture and can include the following:

Standing or sitting crouched over

Bad posture is one of the biggest problems causing SCM strain. This can easily happen when you sit in front of the computer for a long time. Not only do many people slump in their chair but also have their head projected forward. Remaining in this seated position for prolonged timings can strain the SCM.

To correct this issue, try to sit upright with your head erect.

The same can also be said of standing for long periods of time.

People who often read in bed tend to strain their SCM. One reason for this is bad posture while the other is bad lighting. With pillows behind your back, and the light not falling on the reading material, the shoulders tend to get overloaded.

The same problem may also occur when you hold the phone on one side with your shoulder. There is also a possibility of this happening when you go swimming. Swimming demands breathing and constantly turning the head, which overloads the shoulders.

Sleeping with too many pillows

While it may seem like the comfortable thing to do, sleeping with too many pillows will strain the neck. Instead, it is better to sleep with your head straight and the pillow ends tucked under the shoulders.