As a lady doctor, I am often asked about a woman’s “private” issues, particularly reasons for a missed period and negative pregnancy test. At times, the lack of knowledge on show from many woman is quite frustrating for me. But you take things like these as a matter of routine and continue to inform as best you can.

Yesterday a distant relative came to visit us at lunch. As I was busy in the kitchen, she quietly approached and asked me about her missed period and negative pregnancy test. I was awestruck as I had no idea that she was going to ask me this in the kitchen. She kept eagerly waiting for my response. I had the feeling that at her age (45+) there is less chances of conception but at the same time I didn’t want to break her heart. She seemed quite hopeful. I simply reassured her, and told her to confirmation from a gynecologist to be sure.

Now I understand, that missed period and negative pregnancy test can be a very nervous situation for women. This rings true for those who want to conceive and also for those who don’t want to. It can ignite a halo of apprehensions and fears like

“I must be pregnant, there is something wrong with the test strips”

Let’s take a periscopic look at the situation and delve deeper into the causes of a missed period and negative pregnancy test. 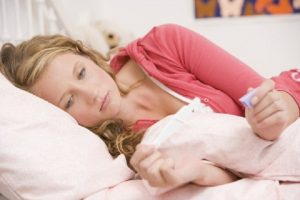 In either scenario, it is best to clear out the confusion. It is best to be better aware of why a woman may have missed her period and still get a negative pregnancy test. For starters, it is important to know that wrong pregnancy test results can happen. Therefore, try to identify other symptoms of pregnancy first.

Women who experience pregnancy symptoms like morning sickness, tender breasts, smell sensitivity and unusual food cravings, are likely pregnant.  It may just be that the pregnancy test came out wrong.

This is known as false negative, which will be discussed a little later. But if you experience both a missed period and a negative pregnancy test, then some of the following factors could be responsible:

Stress is a known factor for causing irregular periods. Women who are under a lot of stress will experience their monthly cycle becoming highly erratic. They will suffer from delayed periods or sometimes sooner than expected periods. The cycle can fluctuate greatly for women under stress. This can cause them to believe that they may be pregnant after missing a cycle, or delayed menstruation.

Fluctuating levels of stress hormones like cortisol can aggravate stress. The best advice here is to find different ways to destress and bring hormonal balance to the body.

The body needs a balance of healthy nutrients to maintain a regular menstrual cycle. But if the diet is too rich in, or too deprived of certain nutrients, the menstrual cycle will suffer. Poor eating practices can affect the menstrual cycle and cause late periods. The result could then be a missed period along with a negative pregnancy test.

Poor eating habits or eating disorders such as bulimia or anorexia can also cause irregular periods. At the same time, too much coffee and excessive alcohol may also alter the menstrual cycle.

The loss or irregularity of the menstrual cycle can also be due to low body fat, and high energy expenditure.

Certain medications can also cause a women to have late or irregular periods. These can include birth control pills, thyroid medication, antipsychotics or chemotherapy drugs among others.

Among these the most common culprit is the use of contraceptives. Oral contraceptives cause hormonal changes that cause missed or late periods. Even when birth control pills are discontinued, it still takes time before regular menstrual cycle resumes. And until regularity returns, women may continue to experience irregular menstruation.

Often women who stop taking contraceptives can miss their period followed by a negative pregnancy test. Naturally, they start to worry about their condition.

While most women experience menopause around the age of 50, some may experience it earlier in their late 30s or early 40s. Perimenopause is the time of transition before entering menopause. It is marked by fluctuations in estrogen levels in the woman’s body. These fluctuations can cause menstrual irregularity by making periods longer or shorter than usual. Or, women may sometimes miss a cycle altogether.

Perimenopause can vary greatly for each woman with the average length being four years.  Some women may only experience perimenopause symptoms for a few months. But others may have to put up with late, missed or irregular periods for much longer. If a negative pregnancy test follows a missed period, it may that the woman is perimenopausal.

This transition periods ends when a woman has gone 12 months without having her period at all.

Breastfeeding causes irregularities in monthly cycles. For some new moms, regular periods may take longer to return. Instead, it may seem like they are skipping monthly cycles altogether. Many often experience late periods while others may not get their period for a long time.

This fluctuation in returning periods is caused by the high levels of prolactin present in the mother’s body. Prolactin is a hormone that helps make breast milk.  However, it also suppresses female hormones linked to the menstrual cycle.

Plus, the duration and frequency of feedings can also affect regular periods.  If the baby is undergoing a growth spurt and starts feeding more, the mother’s monthly cycle gets interrupted.

Often, thyroid disorders and menstrual irregularities go hand in hand. One of the functions of the thyroid gland is to regulate metabolism. But when this does not work properly, the result could be irregular periods.

Women with thyroid problems often experience delayed menstruation or even no menstruation at all. Those who have an overactive thyroid will have infrequent or lighter than usual periods.

But those who have an under active thyroid may have heavy bleeding and more frequent menstruation. When women with either condition experience a missed period and a negative pregnancy test, their thyroid may be to blame.

The pituitary gland is a tiny organ that produces different hormones in the body. If the gland malfunctions or becomes damaged, it can cause a hormonal imbalance. This imbalance results in irregular or missed menstrual cycles.

Physical factors that cause delayed or irregular periods can include uterine problems. Uterine structural abnormalities like scar tissue or other growths can cause menstrual irregularities. This may involve problems like the development of polys, fibroids, cysts, or endometriosis.

Such abnormal growths can easily cause the menstrual cycle to suffer and become irregular. The result may be a missed period and a subsequent negative pregnancy test.

Medical conditions like PCOS or polycystic ovary syndrome can also cause irregular menstrual cycles.  The same can also make women miss their period.You can learn more about PCOS here and Natural Remedies to treat PCOS here.

In this condition, the normal menstrual cycle does not occur because of hormonal imbalance. As a result, this hormonal fluctuation can cause ovulation to stop. As a result, women experience much delayed or completely missed periods.

But if a woman is of childbearing age and experiences typical pregnancy symptoms in spite of a missed period and negative pregnancy test, the case could be of a false negative.

What Is False Negative?

This term refers to a pregnancy test that shows the result as not pregnant. However, the woman experiences all the usual symptoms of an early pregnancy.

Home pregnancy tests work by measuring a hormone known as hCG or human gonadotrophin. This hormone is only present when a women is pregnant. hCG is detectable from the very early stages of conception soon after the egg is fertilized.

But hCG levels can vary in every pregnancy.  For women whose hormone levels are very low, detecting a pregnancy early on can be difficult. As a result the pregnancy test shows a negative result.

Also, since every woman’s cycle varies, some may conceive later in their cycle. This may need retesting after a few days.

Just as overall timing is important to detect hCG levels, it is also important to test at the right time of the day. For example, hCG levels are most concentrated in urine earlier on in the day. So, a pregnancy test should be done with the first morning urine of the day.

Taking the test earlier on in the day guarantees more accurate results. And a negative pregnancy test can result if the test is done at a later time in the day.

If the test is taken at a later time in the day, it is also possible that the urine has become too diluted with water. This urine does not have the correct composition to identify hCG levels.

If it is not possible to take the test early on in the morning, then avoid drinking a lot of fluids before taking the test. Ideally, the test should be done when urine composition is most concentrated.

Not all pregnancy test strips are created equal. This is because some test kits may be more sensitive to hCG detection than others. Pregnancy test kits with a lower sensitivity do not always detect hCG levels earlier in the pregnancy. This can result in a negative pregnancy test.  So make sure to get a reputable brand and repeat the test a few times if necessary.

There are many choices when it comes to purchasing a home pregnancy test kit. Choose one that is a well-known brand and comes with a high sensitivity.

Sometimes, a negative pregnancy test may happen because the instructions were not followed properly. Consequently, the strip was unable to give a correct result. One of the most common mistakes is to not give enough time for the strip to show results.

At the same time, allowing a test to sit for too long can also yield false negative results.

You can always retest in a few days, especially if pregnancy symptoms also persist.

Pregnancy test kits expire because they come with a shelf life. So when the chemical for identifying hCG levels is no longer effective, the test doesn’t work. It is not able to deliver accurate results.

To avoid a false negative, do not use a pregnancy test kit that is too close to its expiration date. Remember that most kits typically have a shelf life of 2-3 years after production.

An ectopic pregnancy is also called a tubal pregnancy. This is when the fertilized egg implants somewhere else and not in the uterus. Typically, hCG levels are lower than usual in this type of pregnancy. They do not double within 48-72 hours as they would in a normal pregnancy.

But even in cases where the hCG levels do rise, they do so very slowly. This makes it difficult to detect an early pregnancy.

How Early Can A Woman Take A Pregnancy Test?

Even though pregnancy test kits claim to detect early pregnancies, not all give accurate results. For the most accurate results, take the test one day after your period is due, that is the first day that you are late. Even better is to wait three days after the period was due to start and then take another test. If pregnant, by this time hCG levels will have risen to detectable levels.

However, if you receive a negative result, but feel sure that you are pregnant, make an appointment with your doctor. Medical professionals can administer blood tests that can detect much lower levels of hCG. These tests can give a more exact result instead of a false negative pregnancy test.

When Should You First Bathe Your Newborn

Feeling Cold During Pregnancy? This Might Be Why And How To Stop