Home
Oral Health
Do Your Gums Bleed When Flossing? Causes And Treatment For Bleeding Gums

A lot of people do not floss because their gums bleed when flossing. Whereas, it is actually the other way round. Gums bleed because you do not floss regularly.

Flossing has been an integral part of oral hygiene since pre-historic times. There is evidence that twigs and horse hair were used as floss long before modern floss was introduced by Dr. Levi Spear Parmly in 1815. He introduced the idea of using waxed silken thread as floss and later published a book which emphasized the importance of brushing and flossing daily.

The concept of flossing teeth isn’t a new idea at all, but it’s surprising that people don’t take it seriously any more. According to the American Dental Association (ADA), only 12 percent of Americans floss daily.

Why Do My Gums Bleed When Flossing?

1. Improper cleaning of teeth and gums:

This is the number one cause of bleeding gums. I wouldn’t say bad oral hygiene because that sounds rather judgmental. A lot of people do brush their teeth regularly but because of an improper technique and omitting floss completely, the food material that remains hidden in between and on tooth surface gives rise to bacteria and acids that cause tooth decay and gum disease.

Gum disease or periodontal disease will also make your gums bleed when flossing. It is so common, that people assume it is normal to have bleeding gums. It is usually painless and the major cause of tooth loss in adults.

The two types of periodontal diseases are:

Factors that increase the risk of periodontal disease:

How to Stop Gum Bleeding? 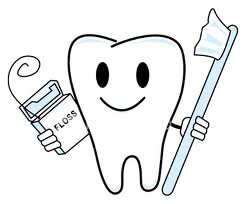 Cleaning the teeth and gums regularly with proper techniques is the key to stopping gums from bleeding. When plaque is not removed daily by means of flossing and brushing, hard deposits called tartar or calculus is formed. These form a matrix that promotes the accumulation of more plaque and bacteria above and below gum line.

Brushing only cleans 60% of our teeth. 40% of tooth surface is between the teeth where only floss can reach. If we don’t floss, the bacteria that cause gingivitis will destroy the fibers that attach our gum tissue to our teeth. This can cause swollen gum around one tooth. Flossing teeth removes stuck filth all the way through. It also reduces formation of dental plaque, avoiding future dental problems like bone damage or loosening of teeth root.

All you need to know about Brushing Teeth:

A toothbrush with nylon bristles was first invented in late 1930s. Today, there are various kinds of brushes available and it becomes very hard to pick the one suitable for our teeth. Some of the types include:

They are meant to serve their own respective purposes for complete dental cleaning.

A soft bristle brush with rounded tips is mostly recommended as anything more can actually damage gums, root surface, and the protective tooth enamel.

Brush your teeth, tongue and gums to remove plaque and food debris.

At least twice a day if not more. Some dentists recommend three times a day, after you first wake up in the morning, after you return home from school or work and before going to bed. The objective is to disturb the colonization of plaque bacteria and not let it sit undisturbed for too long. If you do this, calculus (tartar) will never be able to attach to your teeth. Many people think twice a day is enough. Well, what happens if you miss one of those two times? The plaque bacteria gets 24 hours to organize and grow.

How to brush your teeth?

Manual brushes require the most amount of work and concentration on our part. There must be a conscious effort to use small circular motions on all surfaces of the teeth. The index finger and thumb should be at the same level when holding the brush, don’t put your thumb behind the bristles and scrub.

The most common reason that your gums bleed when flossing, but not when brushing is that the toothbrush does not touch your gums. Plaque accumulates and grows at the gum line creating cavities right along it. Target the crevice between the tooth and the gum, feel the bristles half on the gum, all the way around tongue side and cheek side and behind the last tooth on the row. When people brush properly, the gum tissue will heal and shrink.

Once we start doing it correctly our gums will feel a bit sore. The bleeding should completely subside in a week or two and in four to six weeks, another layer of keratin will grow and the discomfort during brushing will go away.

Spin brushes are great for people and kids adjusting to an electric toothbrush before moving to a sonic style brush. Usually a spin brush will remove more plaque and build-up than a manual toothbrush and it has an internal timer to make sure kids brush longer. However, the sonic toothbrushes are the best at removing plaque and staining from all teeth due to the microscopic sonic vibrations.

When to Change Your Brush?

American Dental Association (ADA) recommends that you replace your toothbrush every three to four months, or sooner if you have recovered from an illness or the the bristles have frayed already.

All you need to know about Flossing Teeth:

We might think that since our gums bleed when flossing, we should avoid flossing altogether. But no matter how thoroughly we brush our teeth, it’s impossible to reach the plaque and food debris that has lodged under the gum line between the teeth. Using dental floss every time we brush, not only makes our teeth cleaner, it also stimulates gums, polishes tooth surfaces, prevents buildup of plaque and reduces gum bleeding.

We have come a long way since the 1800s when floss was made out of silk. Today we see the use of Gore-Tex in some varieties and the addition of spongy floss and soft floss for sensitive gums. Floss picks have also become quite popular and simplify the process of flossing posterior teeth and flossing around braces. If your gums bleed when flossing, selecting a floss that best suits you but don’t give up on flossing.

There are a few kinds of flosses available in the market:

How to Floss Properly?

Gather about 18 inches of floss and wind it around your two pointer fingers (or middle fingers), leaving a couple inches to floss with. The point of flossing is to remove that slimy film that grows between the tooth and the gum and for that you have to go to the base of the triangle, as far down as you can go, without cutting your gum.

When you are working the floss between the tight contacts, move the floss in a cheek-to-tongue direction without snapping down i.e. cutting the gum. Gently work down all the way, push against the tooth so the piece of floss takes the shape of a half circle and scrape straight up. You do that to each tooth separately, twice per contact point.

Remember to remind yourself that if your gums bleed when flossing, it is a sign of gum disease and you need to floss regularly to remove the source of infection. Most people will stay away from an area that bleeds, but that is a sign that the particular area needs to be checked and cleaned better, not less!

Be mindful of how often you floss. If you only it once in a while, the gum tissue in between the teeth is going to be upset as it is not used to being cleaned. The more you floss, the more resilient the tissue will become, and stop bleeding.

If it’s your first time flossing in months, chances are your gums will bleed. If you don’t floss regularly, ease your way into it. Soon enough, you’ll wonder why you never did it in the first place!